Keress minket a Facebookon is!

“Those who create, create value, who creates value also protects it, and protects values created by others as well”

About the mission of the creation-oriented social and integrational program of Van Helyed Foundation.
Writer-director Kriszta Bódis first got introduced to life in the Hétes of the former industrial town Ózd in Hungary in the winter of 1998 when she shot a documentary on the reasons behind wood theft and the life and times of Hétes's residents. She was soon convinced that a way to help the people living there in deplorable conditions had to be found. That a way out must be found. Van Helyed was born out of these efforts.

The Hétes is one of the 16 segregated neighbourhoods around Ózd. It used to be a workers' community which gradually fell apart after the collapse of the Ózd Metallurgical Complex in the wake of the disintegration of the Iron Curtain. Hétes, already lacking most luxuries, became a subject of ghettoisation: non-Romani residents, as well as the more affluent Romani families, quickly moved out. The ones who stayed had been living on welfare and occasional jobs, accumulating enormous utility debts, seeing their homes fall to pieces. Social problems and criminal activity had been dominating the perception of Hétes by the rest of Ózd - and the local government saw the demolition of the entire settlement as the only solution.

The Van Helyed Foundation aims at turning these processes around -and we are proud of our considerable success in the last 15 years. Our model program for social reintegration focuses on creation and art. We believe that: "Those who create, create value. Who creates value also protects it, and protects values created by others as well.”
Together with the residents of Hétes we emphasize the importance of work and engage the residents in making life in the projects better. We encourage the taking care of what has been created. We believe that the whole community will be stronger by the preservation of the values created together. We call our work a "model program" as we are working on becoming exemplary to others: ghettoisation can be turned around! 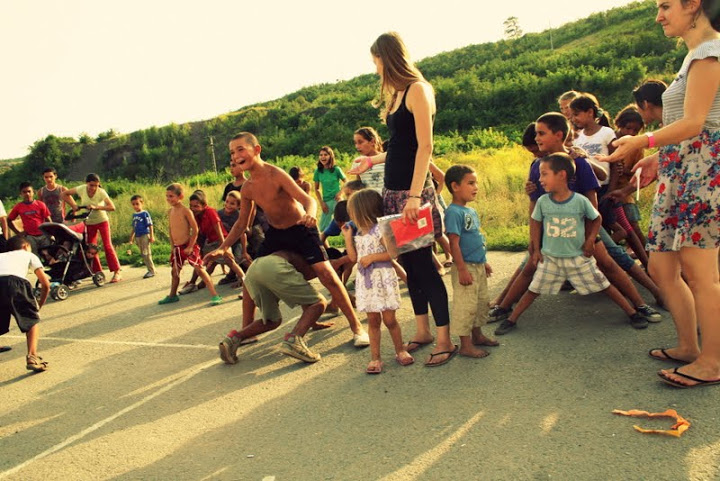 Our goal is to improve the living conditions in Hétes. One of our most important achievements is the fact that the settlement hasn't been demolished. We have been repairing homes -and, after serious conflicts, we were able to install recharge card-operated electric meters on the houses of Hétes which led to the end of electricity theft and freed the community from the life threatening, ruined mains. We have built a main square within the settlement with benches, which is becoming a popular meeting spot for the residents. Kitchen gardens blossom again and in 2012 a bath house opened with warm water showers, water closets and washing machines available to Hétes families.

In the Hétes, a series of generations has been born into complete hopelessness. Nevertheless, the future of the settlement depends on the children, therefore we put a huge emphasis on their creative education. To ensure this we run our Creative Center midway between Hétes and the city centre where volunteers give art courses to them. Besides these, we provide extra-curricular classes, internet access and media facilities to the children of the slum. One of the most prominent parts of our program is our Creative Camp which we've held every August since 2007. The Camp is one whole week of creative and cultural programs. We are proud to say that many Hétes residents are also active as volunteers for the Foundation.

To make Van Helyed work, we have to coordinate efforts on many levels. We have colleagues on the spot all year - they help the Hétes families in their everyday life and manage the programs. Our volunteers are predominantly from Budapest - we organize their trips online. We are also in permanent contact with local and national authorities.

We aim at achieving results that are not beneficial to the Hétes only. Debt-management and the development of infrastructure, the employment of Hétes residents in our programs etc. - these provide solutions to decade-old problems in the area, to the relief of the local government and utility companies. We assist in perfecting methods which the local government of Ózd can install elsewhere as well, regardless of the ethnic etc. characteristics of the residents in need.  We also engage the residents of other settlements in our programs which softens the introversion typical of those living in segregation.
Our model program provides solutions and methods on a national level for anyone dedicated to fight for the reintegration of those living below the poverty line, and against ghettoisation.
(Translation: Gát Anna)
Facebook Tumblr Tweet Pinterest Tetszik
0